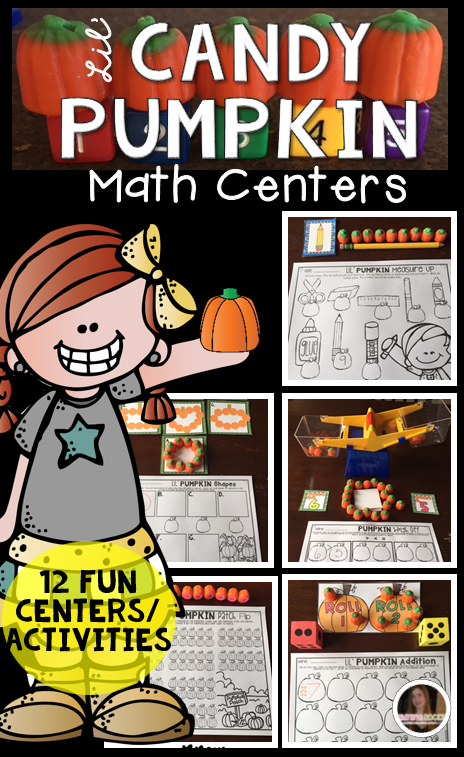 Halloween used to be a great theme at school.  However, most school are no longer celebrating this Holiday with a party.   Pumpkin Candy Math Centers  are a great alternative centers. 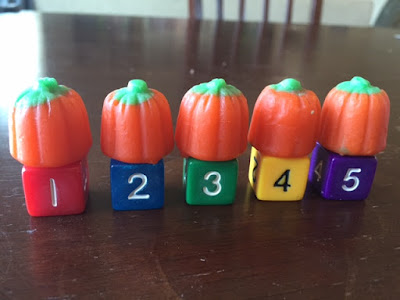 You will need 2-4 bags of Brach’s Pumpkin Candy.  You can usually get a deal with 2 bags.  I think I paid $6.00 for four bags.  They do sell Brach’s at the Dollar Tree, however I believe they are in smaller portions.  Also, the dollar tree brand of the pumpkin candy is too small for the centers. 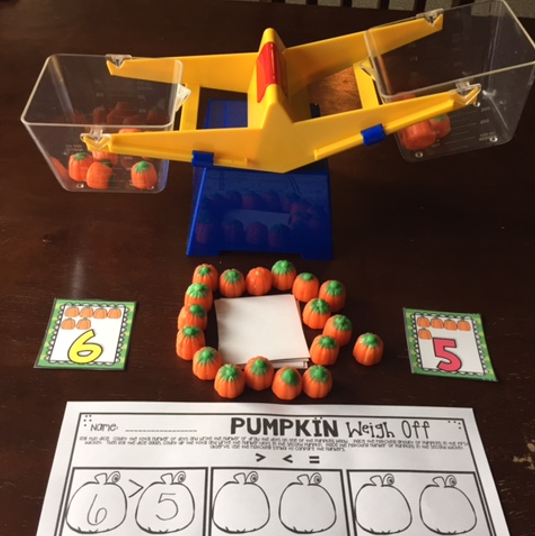 One of my favorite math centers for kindergarten is “Pumpkin Weigh Off.”  The boys and girls not only identify numbers 1-10, they use 1-1 correspondence and compare the numbers/weight and determine which number/weight is greater.  There are several different forms for this one activity.  In the activity above they use the greater/less than symbols.  In a simpler version, they circle the number that weighs more.  This a great way to practice using the balance. 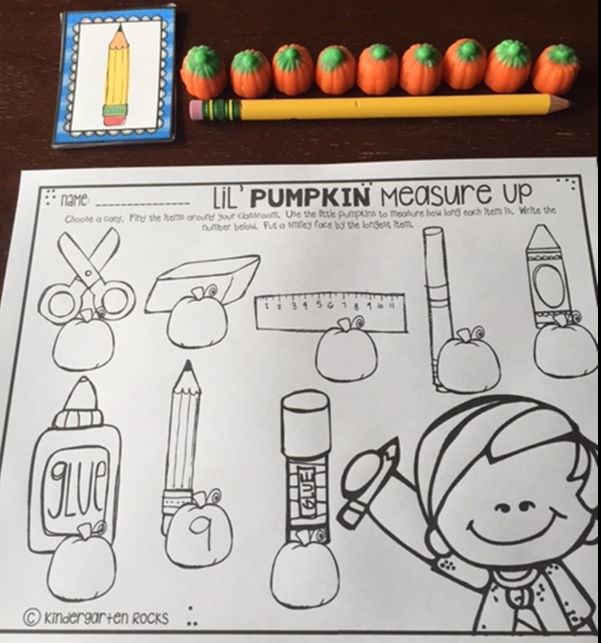 In “Lil’ Pumpkin Measure Up,” the boys and girls measure common school supply items with pumpkins.  Most of the students have these items in their desk or they are easily accessible.  These are items you most likely have around the house if you are using this unit from home.  Students  count the total number of pumpkin “units” long each item is and record it on the recording sheet. 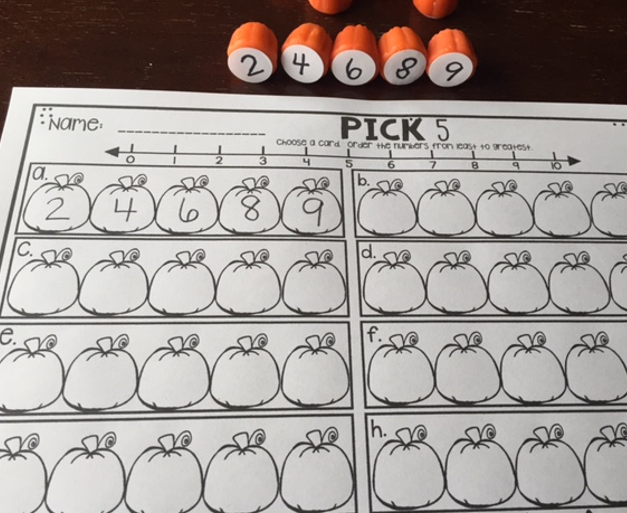 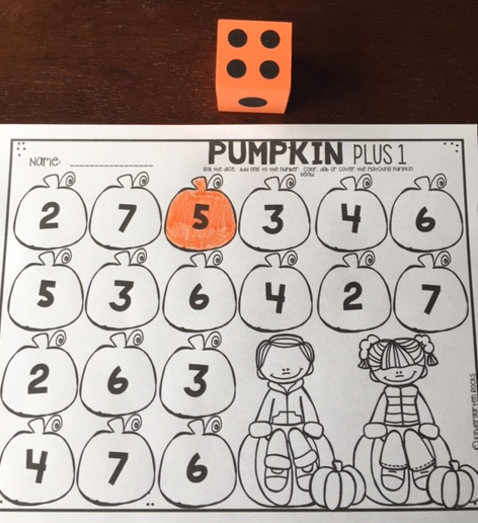 “Pumpkin Plus 1” is and easy one to prep.  Each child needs 7 pumpkins.  They roll the dice and count out pumpkins to match the number of dots on the dice.  Then, they add one pumpkin to the total.  Finally, they find a pumpkin with the matching number and color. 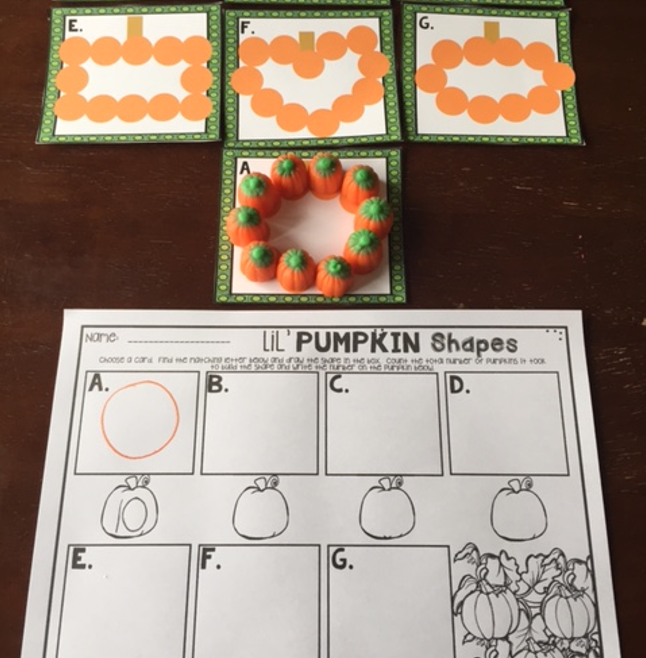 “Lil’ Pumpkin Shapes” is a great activity to work on shape identification, formation and one to one correspondence.  The boys and girls choose a shape and build the shape using the little pumpkins.  Next, they find the matching letter on their recording sheet and draw the matching shape in the .  Then, draw the matching shape in the box.  Finally, they count how many pumpkins it took to build the shape and write the number in the pumpkin. 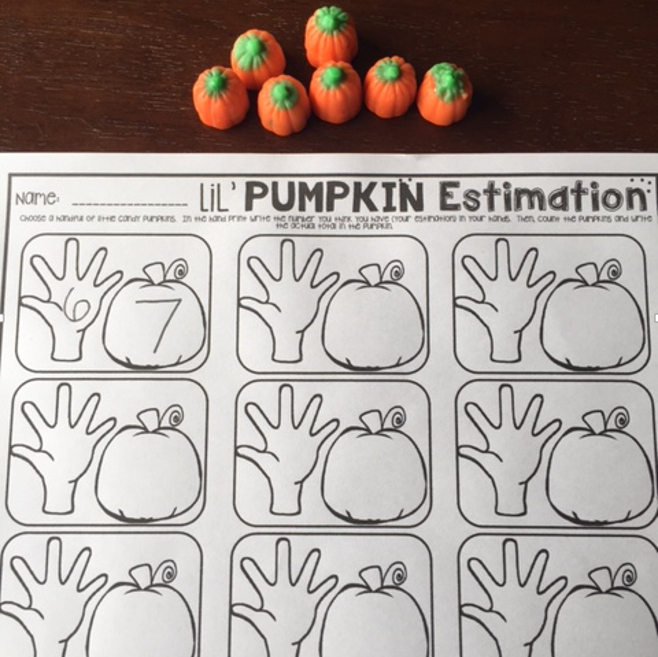 Estimation is a blast with “Lil’ Pumpkin Estimation.”  The boys and girls grab a handful of pumpkins and estimate how many pumpkins are in their hand.  Then they write their guess on the first hand.  Next, they count out the actual amount and write the number on the pumpkin.  I usually don’t encourage them to circle or put a smiley face in the boxes where they make an accurate “guess”  because they tend to always have an accurate guess:) 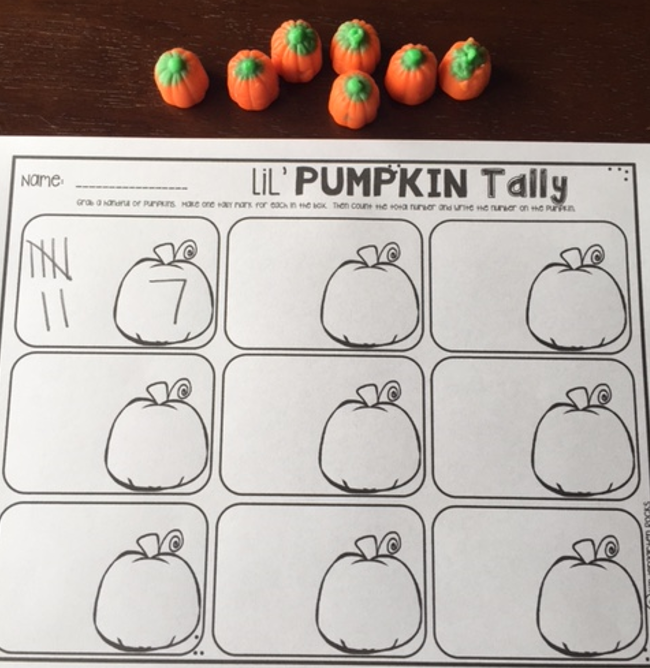 If your students are just learning how to tally, or you want to reinforce the skills, “Lil’ Pumpkin Tally” will be helpful.  The boys and girls grab a handful of pumpkins and make a tally mark for each one in one of the boxes.  Then, they count the total number of tally marks and write the number in the pumpkin. 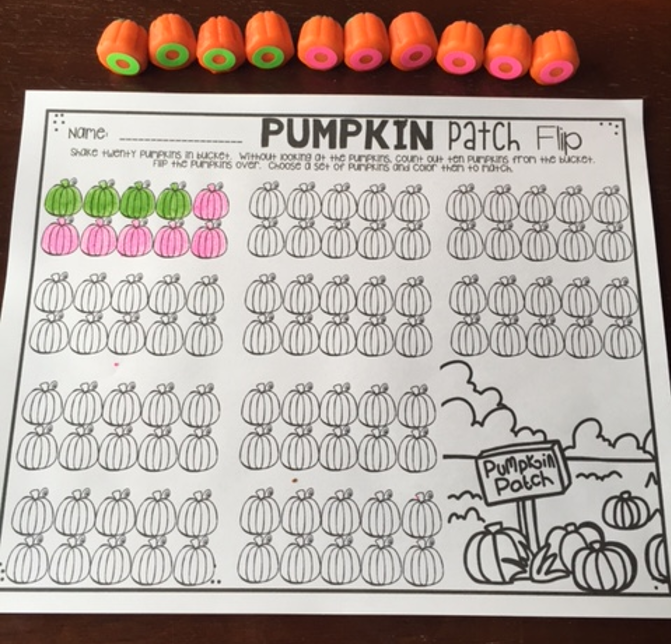 We are really starting to work hard on the concept of addition and really want kids to visualize the idea that numbers represent objects.  The boys and girls love “Pumpkin Patch Flip.”  I purchased binder ring stickers (but any colored stickers will do-dollar store has many mini-circle colors) and chose two colors to use.  I put ten of one color on one set of pumpkins and ten of another on another set of ten.  Place all twenty in a pumpkin pail and have the boys and girls shake the bucket to mix.  They choose ten and color one set of the pumpkins to match.  There is also a recording sheet that has students write out the number sentence. 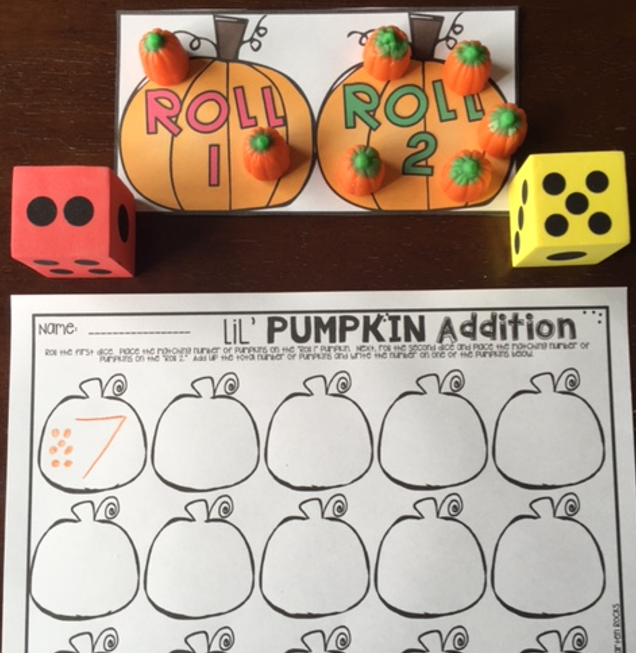 In, “Lil’ Pumpkin Addition” the boys and girls roll two dice.  Then, they count out the matching number of pumpkins, count the total and then write the number in one of the pumpkins.  To hold students accountable have them draw the two sets of dots in the pumpkin as well. 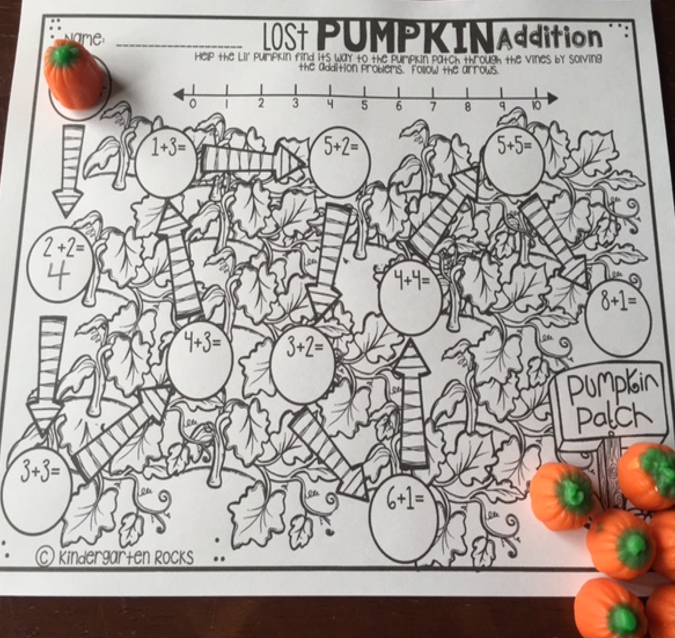 Are you looking for more fall activities?

Math and Literacy Centers for the Year

You may also enjoy:

Enter your email address to subscribe to and receive freebies via your email!

May and Spring Activities …

Back to School Worksheets …

Back to School Calendar …